Chatter broke out as Kimberly Fawcett and Kathy Chase greeted each other in a crowded downtown restaurant Saturday.

The women, both Canadian Forces soldiers, have a rare bond. Fawcett, 43, is a captain stationed in Ottawa and an accomplished tri-athlete and sprinter.

Almost six years ago, Fawcett was preparing to leave for Afghanistan when tragedy struck.

Stationed at CFB Kingston at the time, she was taking her infant son, Keiran, to a relative’s home in the city on Feb. 21, 2006.

An accident on the icy road ahead of her forced her to a stop. Fearing another collision, Fawcett got out her vehicle with her son and climbed an embankment near the road.

Moments later, a driver lost control of his vehicle and struck the pair, killing baby Keiran and forcing the amputation of her right leg up to the hip.

Using physical sport to deal with the grief and stress in the aftermath, she soon excelled as a world-class parathlete.

Despite losing her leg, she was also able to return to active duty shortly after her accident and deployed to Afghanistan in 2008.

Chase, 49, is a sergeant who has been stationed at CFB Kingston since 2005. Her twin sister, Karen McCoy, also in the military, lost her right leg from cancer in 2003.

Chase was introduced to Fawcett through her sister, who shared the common struggle of learning to function again on a prosthetic limb to become a successful athlete with a disability.

McCoy, who is stationed in Ottawa as a warrant officer, is a competitive para-volleyball player.

The three women, along with seven others from across Canada, are set to demonstrate their perseverance and determination in the coming weeks as the group heads to Tanzania to embark on a seven-day climb to the top of Mount Kilimanjaro.

The climb is being sponsored by the ParAthletes of Canada Foundation, and is intended to raise awareness about parathletes and the importance of participation in competitive sport for people with disabilities.

ParAthletes, a word Fawcett created to stress that people with disabilities are “on par” with others, provides athletes with specialized assistive devices, including running-specific prostheses and race wheelchairs, and encourages them to compete.
More on link

Here are a couple of faces to go with some of the names: 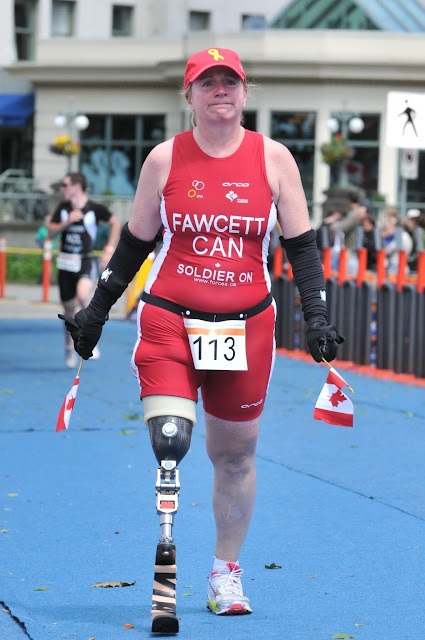 Capt Fawcett is a force to be reckoned with. Met her soon after her accident, always amazed by her perseverence and drive.

Absolutely Inspiring.  Thank you for sharing this story, and the pics.  And thank you to Captain Fawcett's, lead by example and showing us how it's done.  What an exceptional human being, truly inspirational.
You must log in or register to reply here.

Terror on a Sunny Day